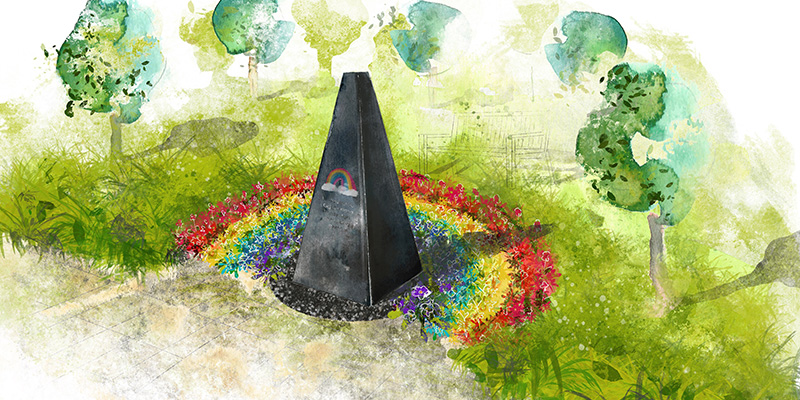 Art graduate Camilla Fitzjohn said she was “overwhelmed and shocked with happiness” when she learned her artwork will feature on a Covid-19 memorial stone at several crematoria around London and the East of England.

Westerleigh Group, the UK’s largest independent owner and operator of cemeteries and crematoria, announced last year it planned to create Covid-19 memorial gardens at most of its sites in England, Scotland and Wales.

Westerleigh issued an open invitation for people of all ages and backgrounds to submit ideas for a design to be etched onto a stone obelisk which will form the centre-piece of each garden.

Westerleigh Group is choosing six designs overall, one for each of its regions, so designers had an opportunity – if they wished – to incorporate something relevant to their region in their entries.

Camilla, aged 52, who lives in Harlow, said: “It feels great and wonderful that something of my art will be looked at by people from the future, there is no prize bigger than that.”

Camilla, who loves art and history, said she read about the competition online and wanted to enter the competition to recognise the kindness and goodness of people helping each other out.

She’s no stranger to artistic success; when she was 10-years-old, she won an art competition in East Ham for her painting of a safer world and last year she won a Christmas card competition with ACL Essex.

Her design for Westerleigh’s Covid-19 memorial features a round white globe which represents the world, surrounded by a rainbow, with hands reaching up into the centre and releasing three birds of paradise.

She explained: “I wanted to incorporate the rainbow because this has been used through the pandemic, and it is to recognise the doctors and nurses who are working so hard in such a difficult situation.

“The white globe represents the world and the sun, light of the world under darkness and the kindness that people showed one another during stressful times.

“The birds being released represent the lives lost and released into the spirit world, where they will be one with nature.

“My husband, David, suggested incorporating the rainbow, to represent the NHS, and my sister, Melissa Wilkinson, suggested the inclusion of hands.

“I decided on birds as I like seeing them against the sun or in the sky.”

Roger Mclaughlan, Chief Executive Officer of Westerleigh Group, said: “We would like the memorial gardens to provide permanent, tranquil places for people to visit to remember loved ones who lost their lives during the pandemic and also to remember and reflect on those who have sacrificed so much to help others during the coronavirus crisis.

“We decided early on that we wanted local people to help shape how the gardens would look, so that each of them would become something of real significance to our local communities.

“We were overwhelmed by the creativity shown by the many people who submitted their imaginative designs and the judging process was a moving experience as it was clear that a lot of heartfelt thought had been put into each entry.

“I would like to congratulate Camilla for her winning design and am looking forward to seeing how it looks in the memorial gardens across London and the East.”

Westerleigh Group hopes to install the Covid-19 memorials at all its sites during June, ready to open for the public to visit in July.